Despite their significance for biodiversity conservation, local livelihoods and the national economy, southwest Ethiopia’s forest and wild coffee areas face threats from deforestation, forest degradation, biodiversity loss and climate change. Among those forest areas that face such danger is the Belete-Gera Forest, which covers 150,000 hectares, which is part of Ethiopia’s highland rainforest and a high priority protected forest area. Belete-Gera forest represents two adjacent forest blocks in two woredas in Jimma zone and stretches over 44 kebeles (lowest government administrative units). The Belete-Gera forest lost 40% of its cover between 1985 and 2010. Population growth in and around the Belete-Gera forest; market forces, particularly for export commodities such as coffee; lack of land use policy and planning; and lack of land tenure security, have put pressure on forest resources. Trees are being cut to increase the amount of arable land for cash crop production. Fuelwood is the sole source of energy for cooking, heating and lighting. Large numbers of cattle are grazing in the forest, trampling undergrowth and eating vegetation.

Digital Green, with the financial support from the David and Lucile Packard Foundation and in collaboration with Environment and Coffee Forest Forum (ECFF), is implementing the Advancing Conservation, Agriculture and Livelihoods in Oromia project. The project will reach 42,000 smallholder farmers, women and youth with the goal of reducing deforestation, forest degradation and biodiversity loss, while improving livelihoods of the forest-dependent smallholder farmers in the two target woredas of the Belete Gera forest landscape.

The project will employ Digital Green’s community video approach to foster adoption of practices that sustainably improve land and water productivity and reduce pressure on forest resources while improving livelihoods. Using a participatory forest management approach, the project will also build the capacity of government institutions and community members to protect forests and restore degraded land in their communities. The project will promote the sustainable harvest and sale of non-timber forest products, particularly honey, spices and coffee. The project will facilitate the formation of 40 women’s self-help groups to address women’s disproportionately low levels of access to extension services, and cultural factors that limit women’s participation in traditional farmer’s groups in the Jimma zone.

The Advancing Conservation, Agriculture and Livelihoods in Oromia project builds from the lessons of a previous project also implemented with the generous support from the David and Lucile Packard Foundation. The predecessor project, Integrating Natural Resource Management into Agricultural Extension Services in Ethiopia, worked in 15 woredas in the Oromia and Tigray Regions in Ethiopia to increase smallholder farmers’ adoptions of natural resource management practices. A total of 44,206 farmer households were reached, exceeding our target by 17%.

Scaling up the Digital Green approach in Ethiopia

Inspiring stories of change from Ethiopia

Gebru Dereje, from Gumer District in SNNPR State gave up city life to move back to his place of birth (Zizencho Kebele) and became a farmer. 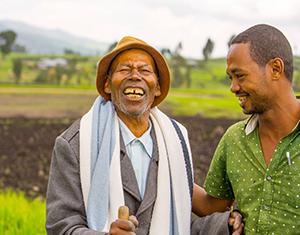 A Youthful Vision of the Future of Food

In this blog, read about how we're engaging with the future of agriculture and the question of how to engage with youth in extension and... 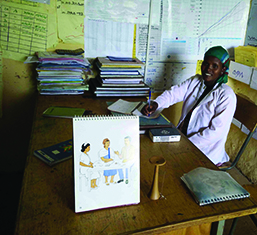 Adnch a health-extension worker in Dembecha, a woreda in the Amhara region of Ethiopia uses Digital Green's community video approach