Women are the backbone of agriculture in India, and that is no exaggeration. They play a pivotal role in agriculture: 85% of rural women in our country are engaged in agricultural activities, and 75% of the farmers in the agriculture field are women. In addition, women are also responsible for the majority of household chores, such as cooking and taking care of children. Despite their efforts, they are hardly recognised as farmers and in most the communities, d power largely lies with the men of the household. Women have restricted mobility, and require permission from their elders and husband. Their stake in intra-household decision making still remains a grey area and is a deep-rooted issue that needs to be worked upon.

Agency and leadership of women farmers a critical to b resilience in agriculture. With this objective, Digital Green’s Advancing Tribal Livelihoods and Self Reliance (ATLAS) project, funded by John D. and Catherine T. MacArthur Foundation, is being implemented in Odisha and Jharkhand where tribal communities make up nearly 50% of the population.

In Jharkhand state, Digital Green (DG) in partnership with Jharkhand State Livelihood Promotion Society (JSLPS) has been implementing the ATLAS project in the state under the Mahila Kisan Sashaktikaran Pariyojana (MKSP) program, which is a subcomponent of the National Rural Livelihoods Mission to empower women farmers.

Our concerted efforts have been towards advancing the livelihoods, resilience and self-determination of tribal women farmers by strengthening the capacity of women-focused Farmer Producer Organisations (FPOs) to navigate market opportunities. Towards this, v frontline workers (FLWs) have been trained in community video production and dissemination skills for further building the capacities of women farmers. They have also been trained on other digital tools for knowledge transfer and for managing the inventory of the village level producer groups. 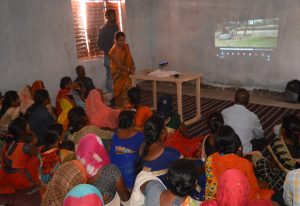 Sabita Devi (FLW, Latehar, Jharkhand State, India) shares that “Video content is easy for farmers to understand, where they can relate to practice in a way that it is doable for them, and we are not training them with any alien content or concepts.  I disseminate videos using a PICO projector during various community meeting platforms (producer group meetings, SHG (s group) meetings etc.) around season-based crop advisories, non-pesticidal management practices, and also around topics related to producer groups and FPOs. Producer group members in my village are now better at understanding the intent of these community institutions, moreover, they have started owning it and are taking charge o the activities.’

The Community Video approach has been Digital Green’s flagship solution wherein we train frontline workers to produce and disseminate videos, themselves. It is owned by the community from start to finish. Under the ATLAS project, 3 teams of video resource persons (VRPs) have been trained, for creating hyper-local video content for various videos, which enables more efficient dissemination of information by the FLWs and greater adoption of practices by the farmers.

By empowering the women community leaders, and FLWs, for effective knowledge dissemination, their capacities have been built around operating a PICO projector for video dissemination and also facilitation skills. Over 170 trained FLWs from the 6 FPO, operational villages are now using PICO based dissemination sessions for knowledge transfer amongst their respective communities. 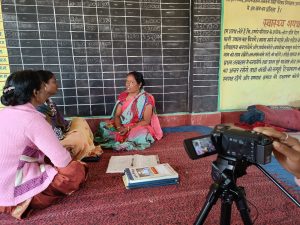 These FLWs have also been trained on using other available digital tools for content dissemination, and currently over 500 such FLWs are using WhatsApp as an alternate digital channel to disseminate content. They are creating Whatsapp groups with women farmers associated with v producer groups and sharing relevant video content with them on a fortnightly basis.

Radha Devi (FLW, Hazaribag, Jharkhand) shares video content with her fellow farmers through WhatsApp-based dissemination using her own mobile device, in a smaller group of farmers. She mentioned “Now, for the first time we are using mobile phones for our w activities. I have formed a WhatsApp group of farmers associated with a producer group in my village, and share videos with the same group at periodic intervals. For the farmers who do not have access to smartphones (even a shared one), and to reiterate the message to all the farmers, I also conduct video dissemination sessions using my mobile, with a smaller group of farmers, mostly during the SHG meetings. Farmers find this to be an engaging and interesting way of knowledge transfer, where they also get the videos in their mobile (through WhatsApp) for quick reference at any later time.”

During the project cycle (July 2021 to Dec 2022), in Jharkhand and Odisha states where the project is being implemented, we aim to reach over 50,000 tribal women farmers with advisories around best practices on various crop cultivation, NPM, and producer group/FPO related topics, thereby building their capacity on crop production, post-production & value addition activities and negotiation skills for increase value proposition for farmers.

Women small-scale producers across India lack the information, and agency to lead resilient and sustainable livelihoods.